When implementing the function of generate Pascal’s triangle, I find a fact that List is faster than Vector in LazyList

I use sbt-jmh to test performance.

However, the two function diffs just :+ and +: and convert function like toList or toVector

In Programming in Scala 3rd , it lists the time cost of each collection. 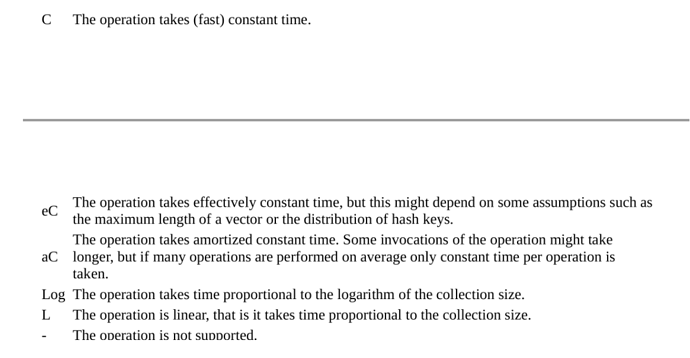 Thus eC is slow than C, but L and much slower than ec, before test, I think Vector is faster than List in this code, not to say Vector in 2.13.2 is re-implement by new alogorithm:

My question is, why Vector is slower than List here?

My question is, why Vector is slower than List here?

More like “why is .toVector slower than .toList here” as I don’t see other differences. Scala’s stdlib uses mutability for performance reasons. .toList uses mutability to construct a List quickly (in linear time, with constant memory overhead). .toVector probably also uses mutability but maybe in a less effective way.

For one thing, a lot of stuff other than prepending and appending is going on in that code.

And not entirely related to the question, but I wouldn’t use LazyList as an intermediate builder for another collection. In this case you could use List.iterate(List(1), numRows)(...). Or in general if you want to avoid generating intermediary garbage or want to fuse intermediary operations together, I would start from Iterator instead of LazyList.

sliding is a major factor here that hasn’t been mentioned yet.

Starting with a version of the test case that removes the LazyList and follows good JMH benchmarking practice (like not using constants and consuming the results to make sure you’re actually computing what you think at runtime):

For this version I get

Using GroupedIterator with additional collection conversions so we only use a different implementation for sliding but still operate on the same types (i.e. .iterator.sliding(2).map(_.to{List|Vector}.sum) instead of .sliding(2).map(_.sum)):

It looks like we have a really bad default implementation of sliding (which is overridden by neither List nor Vector). In both cases the Iterator detour is considerably faster despite having to build an ArraySeq first which then gets converted to a Vector or List.

Finally, summing over the ArraySeq without converting back:

So toVector from an ArraySeq is considerably slower than toList. I didn’t dig any deeper here. With the relatively large instance size of 1000 (on average) this seems a bit odd but it’s probably to be expected. Building a Vector has more constant overhead. Memory use and allocations will be much lower but allocating small objects in a tight loop is fast and has good memory locality. The price you pay is increased memory footprint and higher gc pressure but we’re not measuring either of those.

There is room for improvement though. Vector building has no optimization for building from large arrays. Small arrays (<= 32) are special-cased but larger ones get appended element by element (different from appending a Vector, which is done with 1 or 2 arraycopy operations per 32-element slice, depending on alignment). The collections library should provide a general abstraction for optimizing such array-based bulk operations.

Here’s a better one: https://github.com/scala/scala/pull/9103