The first result List()32140 means what? I am not sure about this.
please help point it out.
Thank you.

And, for this comparison:

For this kind of problems, it helps to follow the types.

Let’s check at the signature of foldLeft`

Thus, let’s see what the compiler infers when you do this:

Thus, it has to infer a type B that is a supertype of Int and of String and of List[Nothing], and Any is the only thing that works for that.

BTW, if you would have used foldLeft for this example: li.fold("") {_.toString + _.toString} you would get back a String as expected.

To be honest, I don’t see any point for fold to exist.

fold exists for parallelizable operations. It requires an associative operator so that the work can be divided up and the partial results combined into a final result.

(On List specifically, of course it’s not going to parallelize anything.)

The first result List()32140 means what? I am not sure about this

I know this is starting to fall into rant / off-topic territory, but for parallel operations I would rather use aggregate, although I do give the point that having fold as a simple alias to an aggregate were both the seq and comb operations are the same is nice.

However, since the parallel module is already separated from the stdlib and there is no way to abstract over the two, I would guess fold is just a leftover.

@BalmungSan please see the sample code above. my further questions:

why foldLeft can return a String type?

Again, look at the type signature:

Is very similar to fold, but in this case B is a free variable, it doesn’t have to have any kind of relationship with A, thus it can just infer String

why foldRight get the same result as foldLeft? I expect it to be 4123.

Classical misconception, both foldLeft & foldRight iterate the List from left to right, what changes are the association order.

If you have: List(1, 2, 3) and you fold it with 0 as the initial value and + as the combine operation then the program will behave like this:

This can become clearer when you see their implementations.

To be honest, I don’t see any point for fold to exist.

You need a fold to keep your sheep.

Quite interesting and then scaladoc clarifies it (why – @ BalmungSan has nicely explained), so we should always fallback to APIdoc when in doubt

Well, as I said to Seth, if the purpose of fold is to allow for parallel computations and the parallel module is no longer part of the stdlib I would say that it is no longer needed. But

“why foldRight get the same result as foldLeft? I expect it to be 4123.”

@pengyh if you don’t mind, I’d like to have a go at reinforcing the concepts already explained by @BalmungSan in his great and comprehensive answer 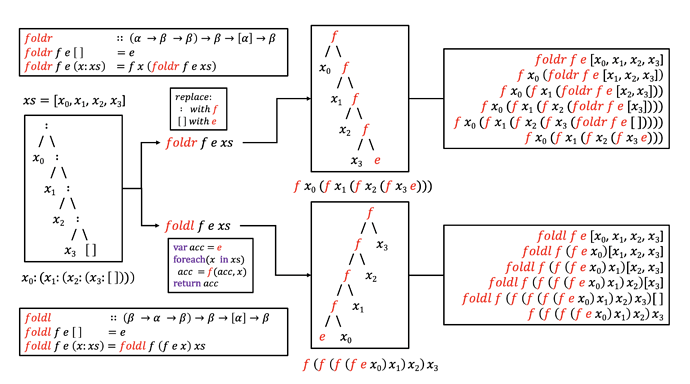 The above is a programmatic definition of left and right folds. In that implementation, the left fold is tail recursive, whereas the right fold isn’t.

Here is a mathematical definition of left and right folds. 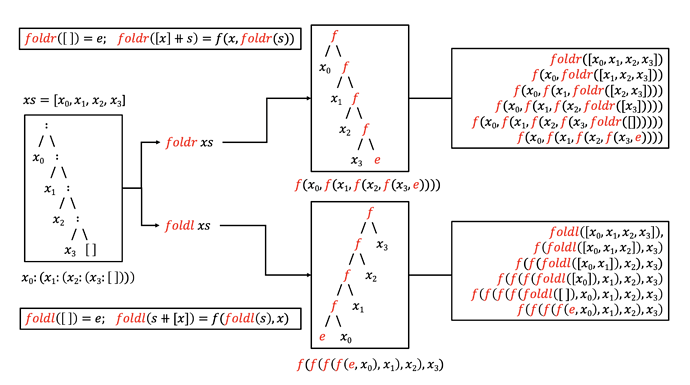 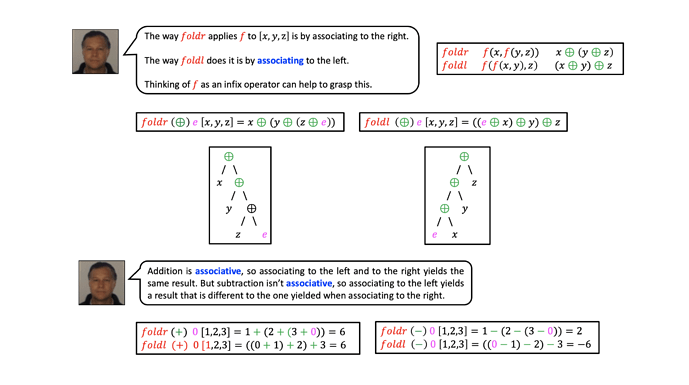 The behaviour of left and right folds with an associative operation and the operation’s unit is captured by the first duality theorem of folding: 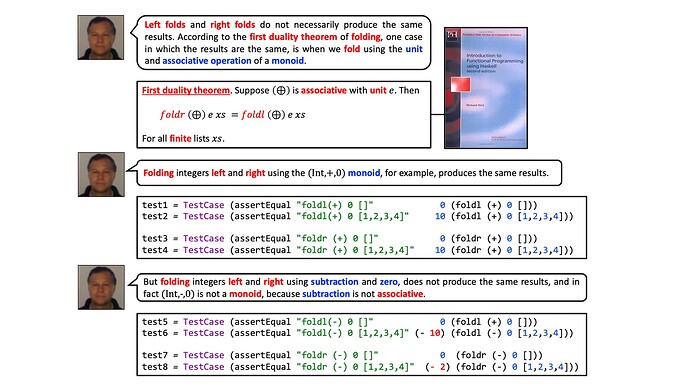 When a right fold is implemented as a non-tail recursive function, it has the disadvantage that it is not stack-safe, i.e. if the list being processed is sufficiently long then the function will encounter a stack overflow exception. One way to avoid that is to define a right fold in terms of a left fold. This can be done thanks to the third duality theorem of fold:

In Scala, foldRight is stack safe, because it exploits the above duality theorem as it is defined in terms of a left fold: 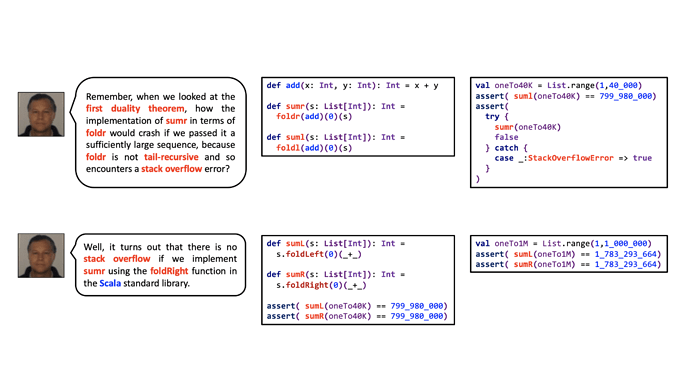 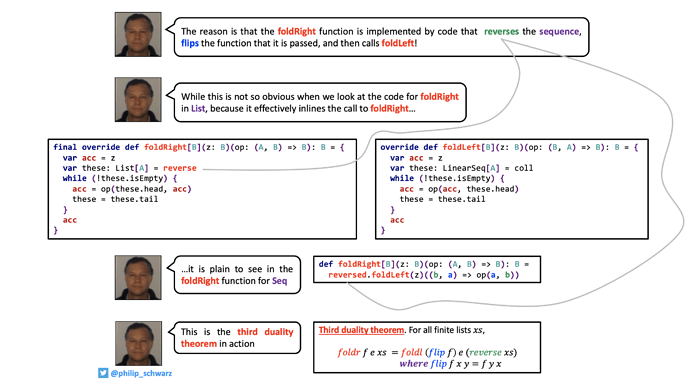 (Urgh! - it looks like “effectively inlines the call to foldRight” should end with foldLeft.)

Finally, I have a slide for what @BalmungSan said here:

// That is why calling foldRight with Nil and :: gets you back the same list.
// And doing the same with foldLeft reverses it. 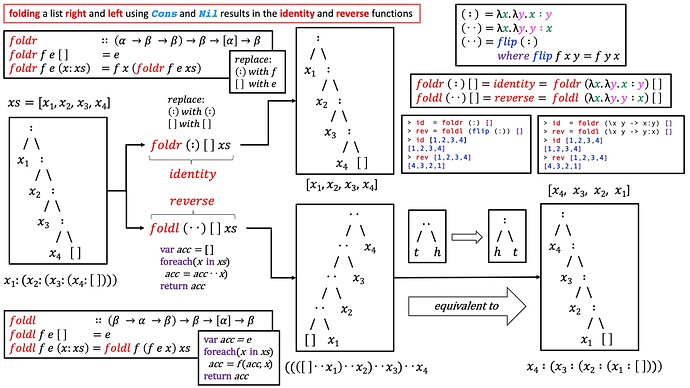 I hope you find the above useful.

If you liked any of the above, the slides come from the following:

Left and Right Folds- Comparison of a mathematical definition and a …

(download for perfect quality) - See how recursive functions and structural induction relate to recursive datatypes. Follow along as the fold abstraction is i…

(download for perfect quality) See aggregation functions defined inductively and implemented using recursion. Learn how in many cases, tail-recursion and the a…

(download for flawless quality) Develop the correct intuitions of what fold left and fold right actually do, and how different these two functions are. Learn o…

(download for flawless image quality) Can a left fold ever work over an infinite list? What about a right fold? Find out. Learn about the other two functions u…

(download for best quality slides) Gain a deeper understanding of why right folds over very large and infinite lists are sometimes possible in Haskell. See how…