How to specify import in ScalaFiddle

Is there a way to use org.boss in Scala Fiddle?

Here is an example program using org.boss. The I press Run, I see the following errors.

As far as I know, ScalaFiddle only allows external libraries you can select in
the left sidebar, adding arbitrary libraries isn’t possible.

Also, as ScalaFiddle uses ScalaJS, there probably won’t be any support for Java libraries in the future.

Agreed. Scastie might be plausible (IIRC, that builds and runs server-side), but I suspect it still doesn’t permit arbitrary libraries – simply from a security POV, it’s challenging to allow that in a web-based system…

Scastie gives me a strange information message. Does the message make sense. My brain was unable to parse the sentence.

@siddhartha-gadgil, I’m not sure what you mean by allows all libraries published on Maven. Was the claim that jboss is supported or is not supported?
Is this message expected? Is there something I need to do so that jboss is found?

Sorry, I have used it very little. You have to click on “build settings” on the left and search for and add libraries. I believe it should find everything on Maven central.

@siddhartha-gadgil, I don’t find it in the list of available libraries.

Is jboss considered dangerous, or old-fashioned, or rarely used? 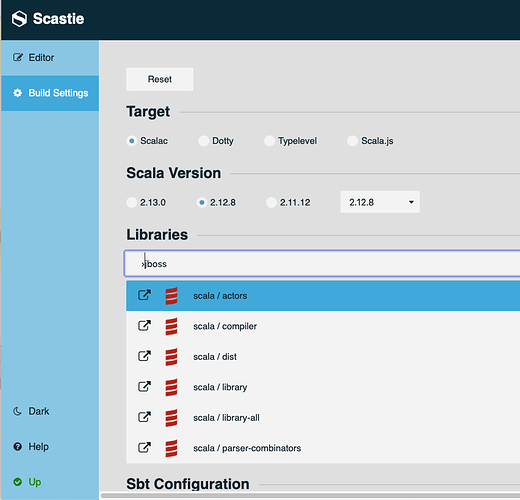 I also did not find it when I just tried, but it is beyond me why jboss is not there.

Is jboss considered dangerous, or old-fashioned, or rarely used?

In practice, I don’t see JBoss used a lot in the Scala world, but I suspect it’s none of the above. More likely, Scastie runs on a whitelist (which makes sense from a security POV), and nobody has happened to include JBoss there…